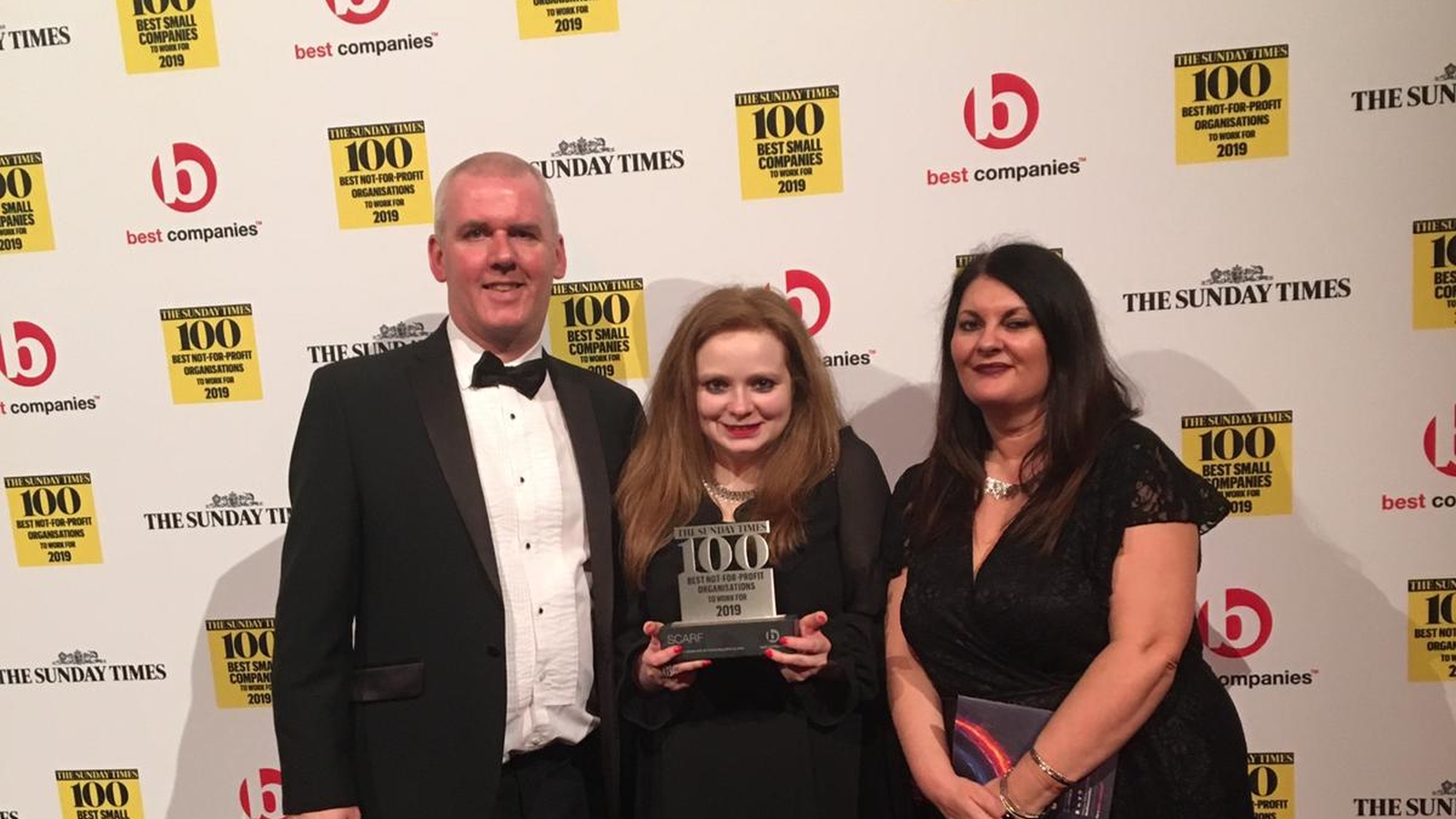 Scarf has been named as one of the top companies to work for in the UK for the fifth time in six years.

We placed at number 32 on the Sunday Times Top 100 Not-for-Profit Organisations to Work For list following feedback from an anonymous staff survey compiled by Best Companies, which also awarded Scarf two-star accreditation, commending the company for “outstanding employee engagement”.

In addition, Scarf landed a spot in the Top 50 Scottish Companies list with the exact placing to be announced on March 4.

Speaking ahead of the event, Mr Lawrie said: “This is a fantastic achievement for our team and really sets us apart from many of our peers. To place in the list alongside some major nationwide charities shows that we, as a team of just over 60, really do punch above our weight and offer something completely different to other employers.

“We are acutely aware that with funding from central and local government always being squeezed and scrutinised, we will never be able to compete on wages with the private sector, however we do offer a workplace culture that is, in our eyes, world class, and driven by our staff with the full support of senior management and the board and we are delighted to be able to reward the team with this latest addition to our trophy cabinet.”

Scarf previously made this list in 2014, 2015, 2016 and 2017 and this is the latest in a string of awards for the Aberdeen-based organisation, which was previously named Best Employer at the Press and Journal Gold Awards and picked up the Commitment to People Development title at the Northern Star Business Awards.

Jonathan Austin, Founder and Chief Executive of Best Companies, said: “I would like to congratulate Scarf on their achievement of a Two Star Accreditation status and being named as one of the UK’s Best Companies to Work for.

“Best Companies have been producing the Accreditation standard since 2006 to acknowledge excellence in the workplace. We are proud that organisations like Scarf focus on their employees and have been rewarded with an engaged workforce who tell us that they’re a best company to work for.”

Scarf was founded in 1985 as an Urban Aid project with the aim of tackling fuel poverty in particular areas of Aberdeen City and over the past 34 years, it has grown to a team of 65 staff across two offices in Aberdeen and Dundee.

Scarf now delivers projects on behalf of the Scottish Government, local authorities and the Energy Saving Trust as well as spawning its own commercial arm offering simple and hassle-free energy brokering services for businesses and delivering accredited training courses in Energy Awareness and personal and leadership development programmes from The Pacific Institute.