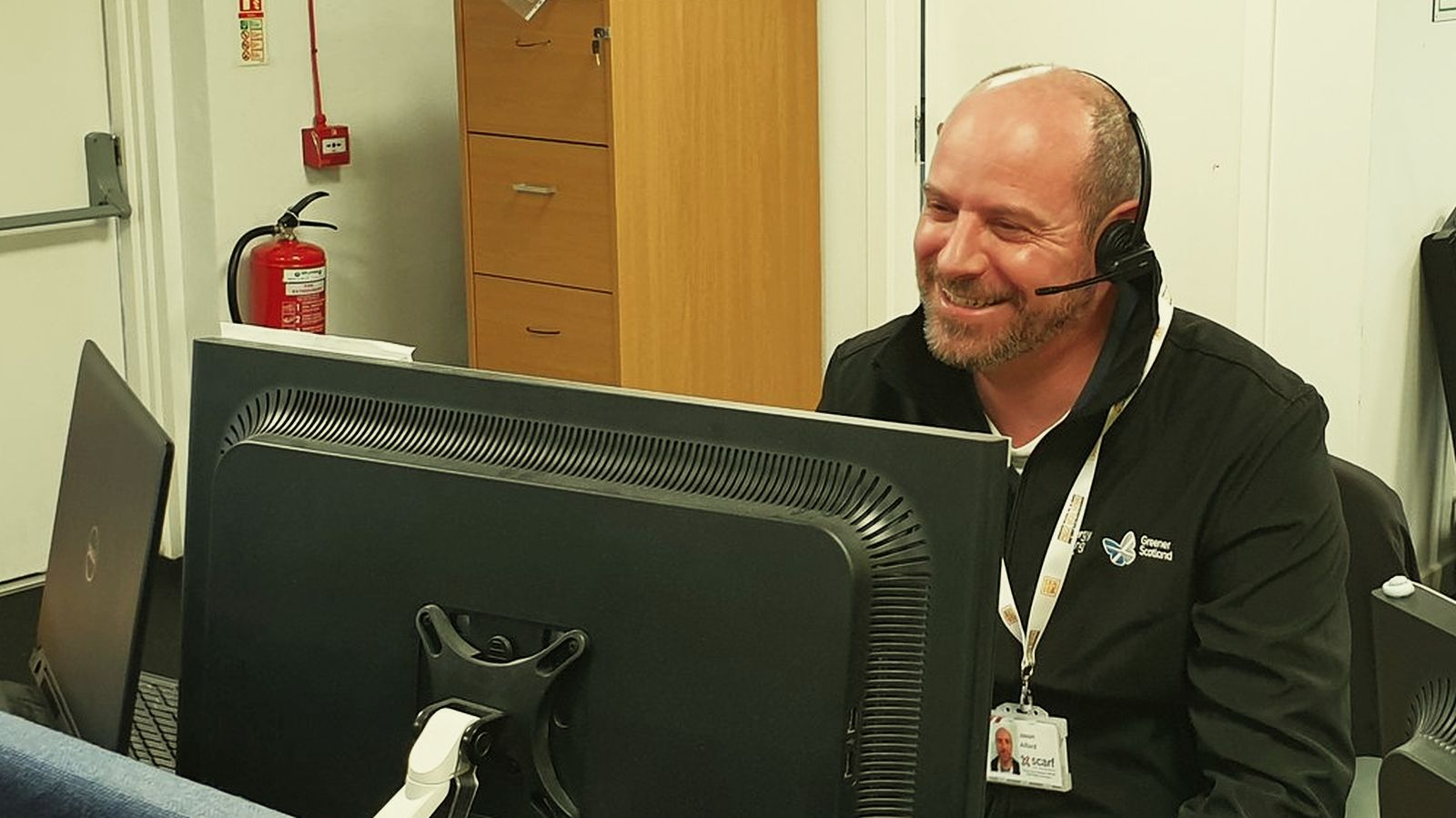 The STEPS programme is helping change lives in the North East.

The internationally-recognised personal development course – devised by the Pacific Institute – is being delivered in the area by Scarf; and it’s having a positive impact.

One of our Energy Champions, Jason Alford, has followed his progression from STEPS to a full-time role here at Scarf, after years of unemployment.

“I was born in Wales but I have spent the last 40 years living in the north east of Scotland. I don’t think of myself as Scottish, it’s the old ‘you can take the boy out of the Valleys but you can’t take the valleys out of the boy’! It would be more than fair to say that school and I didn’t get on – being dyslexic didn’t help. I left school with no clear idea of what I wanted to do for the next 40 work years and worked at a lot of different jobs over the years – retail, oil and gas, bar work, Royal Mail, events, then 16 years as a care worker.

“2013 found me working in palliative [end of life] care for two gentlemen. Both died within a month of each other, around the same time I was going through a divorce. This left me burnt out and a little depressed. So I took some time to get myself sorted while the company I worked for had no work in my area. What was a supposed to be a short break to sort out my head turned into years of being unemployed, with most of it spent volunteering for a local charity in Banff.

“I was asked if I would be interested in attending Scarf’s Energy Champion course by my Advisor at the Job Centre. I had just finished another course and agreed that this course sounded interesting.

“The first day of the programme was interesting, starting with STEPS. I wasn’t looking forward to self-help but by lunchtime my eyes had been opened. It was fun, and I found I could identify with what was being said, in the way I thought about myself. The Scarf staff being engaging and friendly really helped me settle in and by the end of the first day, I was surprised to find myself enjoying the programme and looking forward to the days to come.”

“Near the end of the Energy Champions programme I was offered a six month contract to work at Scarf in Aberdeen, as an intern. I accepted at once as I felt It would be a chance for me to gain more experience. I felt a renewed sense of self-worth that had been missing for a long time, to work and be paid, to have a fulfilling activity to be a part of, and to learn new skills and use old ones that had been forgotten about. After been unemployed for so long and the negative self-thinking, and low self-esteem that goes along with it, I now feel like a heavy weight that had been keeping me down has been lifted.

“I enjoyed the course and feel that it has given me the chance I needed to begin improving myself both as a person and professionally. I would wholeheartedly recommend the Energy Champions programme to others and have even been able to play a part in a couple of the other Energy Champions groups which have taken place in Aberdeenshire.

“The Scarf team have been open, friendly and supportive during both the course and the internship. Overall, It has been a wonderful experience. I would like to give special thanks to Emma [Paterson, Project Co-ordinator], Fraser [Smart, STEPS Facilitator] and Jim [Robertson, City & Guilds trainer] for their hard work and to Emma for giving me the opportunity to re-enter the workplace.

“It has been a life changing opportunity”

“Whilst working as an intern an opportunity of a job at Scarf working as a Personal Advisor for the HES team came up, Emma suggested that I apply and I did, I got an interview and was offered the job. I started on the 1st of October. From doing a course to full time work between March and October, it has been a life changing opportunity. I hope that others are able to experience this change for themselves.”

We will be delivering STEPS training in Peterhead or Fraserburgh and would love to speak to anyone living or working in the area.

Funding means we can offer this training completely free to anyone who lives in Peterhead or Fraserburgh.