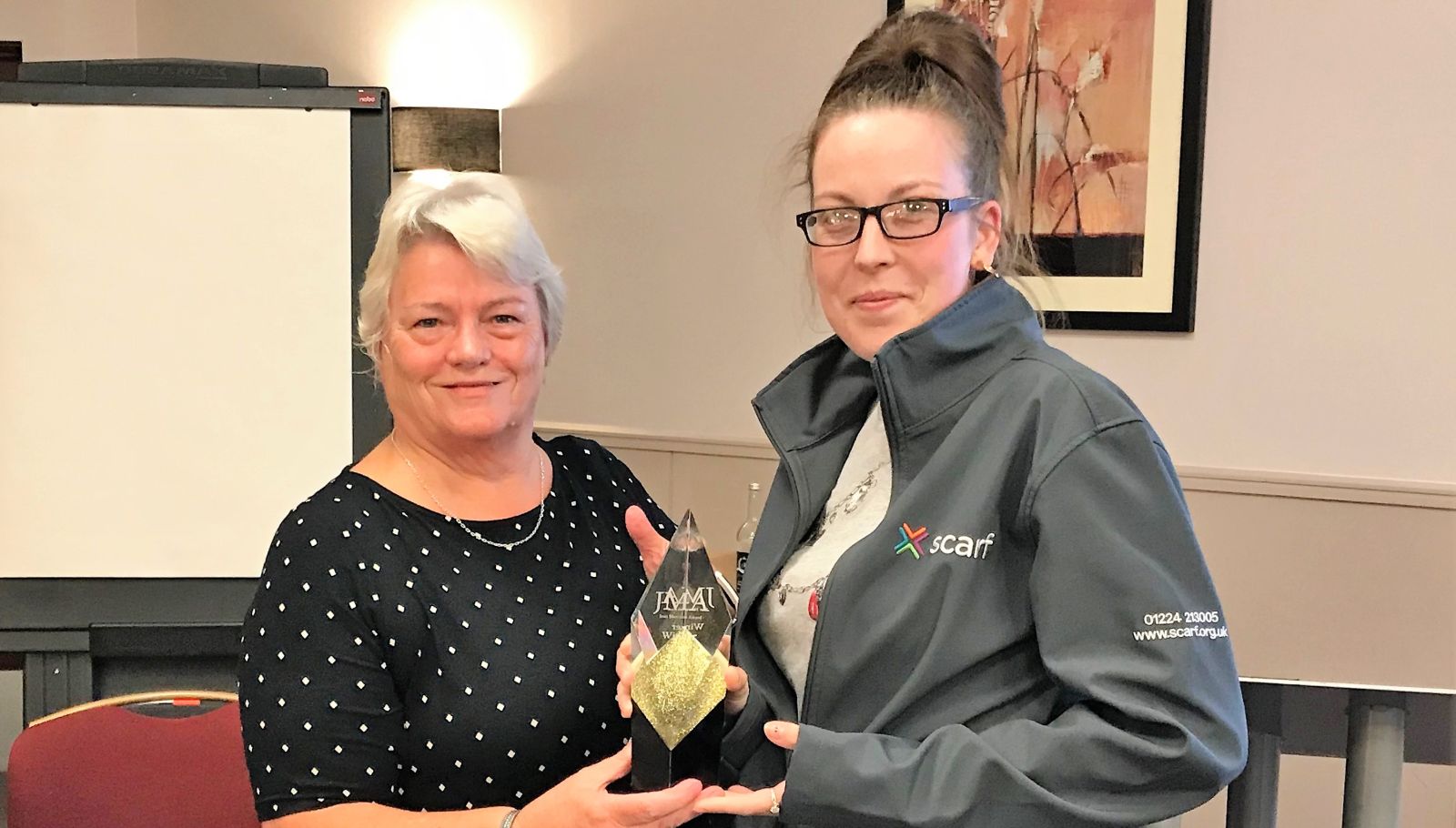 We’ve honoured our founder and long-standing board member with a special title and annual staff award.

Jean Morrison was the original Chief Executive of Scarf when it was launched as an Urban Aid project in Aberdeen in 1985 and served for 27 years before resigning to become a city Councillor and joining our board – going on to be awarded an MBE for her services to energy efficiency in Scotland in 2002.

To mark the continued support given to Scarf by Jean, she has been named as the first Scarf Ambassador and the Jean Morrison Award was also presented to its first recipient at a ceremony on Monday (September 3 2018).

Ed Rennie, chair of Scarf’s Board of Directors, said: “In her time at Scarf Jean was a leading voice and campaigner to reduce fuel poverty in our society.

“In recognition of Jean’s outstanding contribution to Scarf the new award in her name will be awarded to a worthy member of staff annually. The award will recognise the member of staff, who has best demonstrated that they have lived by and embodied Scarf’s values by acting with integrity, treating all with respect, pursuing excellence and leading.”

The first Jean Morrison Award was presented to Emma Paterson, Project Coordinator for Energy Champions, an innovative skills develop project aimed at offering people a start on the path back to employment.

Current Scarf Chief Executive, Thane Lawrie, said: “Emma is an extremely worthy winner, having been key to the success of the Energy Champions project which has made such an amazing difference to the lives of people across North East Scotland.

“Without doubt, she lives and breathes Scarf’s values of acting with integrity, treating all with respect, pursing excellence and leading, on a daily basis and we as a company couldn’t be more proud of everything she has achieved.”

Speaking following the ceremony on Monday, Jean said: “I spent many happy years at Scarf, both as an employee and board member, and have always been a champion for the work the company continues to do to fight the scourge of fuel poverty across the North East.

“I was honoured to be named as the first Scarf Ambassador and was also extremely touched that the new annual award was created in my name – I’ve known Emma and Martin for many years and they are both very worthy winners in my eyes.”

Scarf was founded in 1985 as an Urban Aid project with the aim of tackling fuel poverty in particular areas of the city. Over the past 33 years, we’ve grown to a team of 65 staff across two offices in Aberdeen and Dundee delivering projects on behalf of the Scottish Government, local authorities and the Energy Saving Trust as well as spawning our own commercial arm offering simple and hassle-free energy brokering services for businesses and delivering accredited training courses in Energy Awareness and personal and leadership development programmes from The Pacific Institute.